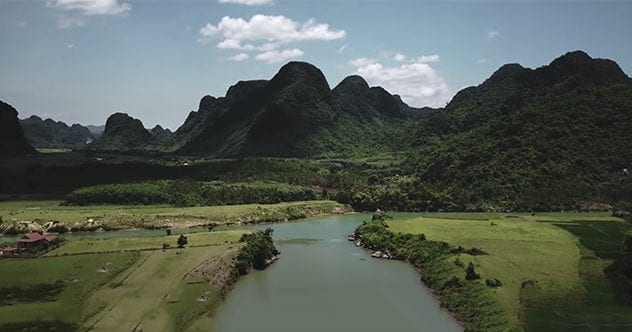 Most Westerners think of Vietnam as a place of war and conflict, and for much of its history, that’s not far off. Still, the modern country has a deep cultural history and is a fascinating place.

This list aims to highlight some of the more interesting facts about the country, focusing on its history and the people who live there.

These ten facts don’t cover everything you should know about Vietnam, but it’s a great place to start learning about this amazing country.

The country’s official name in English is the Socialist Republic of Vietnam, but that’s not necessarily correct. The country’s name is actually “Viet Nam,” and it is only recognized as a single word in predominantly English-speaking countries. Both the Vietnamese government and the UN recognize “Viet Nam” as the country’s proper name.

The name dates back to the 16th century, when it was first recorded in a poem. Of course, the country was populated long before then. Around the 2nd century BC, the area we now call Vietnam was called Nam Viet, which translates into Southern Viet.

Over the centuries, the area was governed by various dynastic kingdoms that included parts of southern China and northern Vietnam under more than a dozen different names. The lands ruled by these kingdoms changed as time passed, and by 1802, the Nguyen dynasty consisted of southern Vietnam, Cambodia, and Laos.

The country was finally called Viet Nam between 1804 and 1839, but it changed to Dai Nam and then Dông Pháp before finally switching to the modern Viet Nam in 1945. At that time, the imperial government adopted the name that remains today.

The First McDonald’s opened in Vietnam in 2014, and the people were excited about it. The first month saw incredibly long lines, and more than 400,000 customers served, but it didn’t last.

It seemed as if McD’s would add another country to its long list of locations it dominated, but its popularity waned rather quickly. There are just under two-dozen locations remaining in Vietnam, but there should be so many more in a country of 100 million people. Unfortunately, Vietnam didn’t embrace the so-called “fast food” because it didn’t compare to what was already available.

Vietnam is known for having some of the best street food in the world, and it’s not something people have to wait for. You can walk down just about any street and get hot, delicious, and nutritious food that is far superior to what McDonald’s and other fast-food restaurants have to offer, and it arrives made-to-order and in less time.

Competition was everywhere, so the fast-food king failed to establish a hold and expand. It didn’t help that the menu didn’t honor the local cuisine, making the restaurant more of an out-of-place oddity than anything else.

Every country in the world has something to offer, and for Vietnam, also known as the “Queen of the Cashew,” it’s… well, it’s cashews. Vietnam is the largest exporter of cashews, which amount to an average of 1.2 million tons every year.

That’s around 55% of the world’s cashew production, but it’s not the only product Vietnam exports. Another major export from the country is black pepper, which is primarily produced in Phu Quoc. Around 248,000 metric tons of Vietnamese black pepper were exported from the country in 2019-2020, and the nation continues to grow this industry.

On average, Vietnam produces around 1.542 metric tons of coffee. It’s one of the most popular drinks in the country and costs around $0.50 in most places. Approximately 40% of the world’s Robusta coffee beans come from Vietnam, where it sits as the country’s second-largest export next to rice.

Vietnam doesn’t have a national sport, per-say, but that doesn’t mean one, in particular, isn’t popular. Most people in Vietnam enjoy playing Sepak Takraw, which is commonly referred to as “Kick Volleyball.”

The sport is popular in Southeast Asia, but it has been exported to other parts of the world, including Canada and the United States. The game is played with a rattan ball, and similarly to football (soccer), players can only hit it with their feet, knees, and head. The court is divided by a net that stretches 20 feet (6.1 meters) and stands 5 feet (1.55 meters) high.

The game’s origin isn’t fully understood, though it may have begun in Thailand in the 18th century. It is incredibly popular in Vietnam, which often wins in international competitions. Unfortunately, the sport has yet to make it to the Olympics.

Annual competitions dominate the SEA Games, a biennial multi-sport competition that includes Sepak Takraw, among many other sports. Vietnam is set to host the 2021 SEA Games in Hanoi, marking the second time the nation has had that honor since 2003.

One of the most popular alcoholic beverages in Vietnam is snake wine, and it’s exactly what it sounds like. The drink is made in one of two ways. A whole venomous snake is submerged in alcohol, where it remains for months until saturated. The other method involves draining a live snake of its blood and bile, which is drained into rice wine or grain alcohol.

Snake wine didn’t originate in Vietnam, having first been recorded in China as far back as the Western Zhou dynasty in 771 BC. Eventually, it moved south into Vietnam, where it grew to become incredibly popular.

It is believed that venomous snakes possess medicinal properties, making snake wine something of a folk remedy. It’s commonly used as an aphrodisiac, or to boost virility, but you’ll probably have to travel to Vietnam to give it a try, as it’s illegal to export.

There are some risks to drinking snake wine, which is especially true when venomous snakes are used. Indirect envenomation can mess with your vascular system, so drink this stuff at your own risk. That said, it’s regularly consumed throughout Vietnam, so severe coagulopathy can happen but is relatively rare.

5 Motorcycles Are The Preferred Mode Of Travel

If you’ve watched any movie of the Vietnam War, or the Resistance War Against America, as it’s called in Vietnam, you doubtless saw a ton of people on motorcycles. The reason for this is simple: motorbikes are the number one form of transportation in the country.

There are an estimated 45 million registered motorbikes in Vietnam, making it the dominant form of transportation over cars, trucks, bicycles, and everything else. More than three million new bikes are sold every year on average, and the vast majority of them come from Honda, which holds around 76% of the market share.

Of course, there are many different types of motorbikes in the country, and they range in price from tens of millions of dong ($430) to more than a billion dong ($43,000). The bikes are so common, more than 79% of the population use them daily for commuting. The global average outside of Vietnam is just 10%, making bikes incredibly important in the country.

Vietnam ranks fourth in the total number of motorbikes, but in 2017, the government announced it would ban all of them in Hanoi by 2030. This is being done to favor public transportation projects.

You’ve probably seen pictures of it online without knowing what it was. Hang Son Doòng is one of the largest natural caves in the world, and as of 2009, it was determined to be the largest known cave passage, by volume. Its name translates to “cave of the mountain river.”

The cave was first discovered in 1991, but it wasn’t officially surveyed until 2009 when cavers from the British Cave Research Association went inside. They found a truly massive cave system but were stopped a couple of miles in by a large wall. Eventually, this was traversed, leading to more discoveries about the cave.

It contains some of the tallest known stalagmites in the world with some reaching as high as 230 feet (70 meters). The cave’s volume was measured to be 1.36×109 cubic feet (3.84×107 cubic meters), Making it the largest cave passage, by volume, known anywhere in the world.

The caves stretch for 3.1 miles (5 km) and reach as high as 660 feet (200 meters) in some places. The cave’s width is 490 feet (150 meters), which has led many to indicate that a Boeing 747 could comfortably fly through the passage without clipping its wings.

The national flag of Vietnam features a five-pointed star on a red field. The flag holds a great deal of meaning and national pride and was officially adopted in 1940. The current version is slightly modified and came into service in 1955.

The five-pointed star represents the five main classes in Vietnamese society: workers, peasants, soldiers, intellectuals, and businessmen. The red field represents the blood lost during years of conflict in the nation’s history. The Vietnam War may have been the most recent, but it was only one in a long list of conflicts.

During that war, the flag of the State of Vietnam and the Republic of Vietnam featured three horizontal red bars centered on a yellow field. When the war came to an end, so too did the flag. In 1976, that flag was abandoned, as the country was unified under a single government.

The modern flag’s red field symbolizes bloodshed but also struggle and the success of the revolution. It is a symbol of pride and national history and can be found on T-shirts, baked foods, at festivals, and just about anywhere flags are commonly flown.

2 If You Leave Vietnam Without Trying A Bánh Mì Sandwich, You Failed

Street food is a big deal throughout Asia, and while you can get a bowl of pho and tons of other dishes in Vietnam, you can’t leave the country without trying a Bánh mì sandwich. Think of a submarine sandwich, but with intensely savory fillings you can eat any time of day.

A typical Bánh mì combines local meats and vegetables, including a type of pork sausage with cilantro, pickled carrots, pickled daikon, cucumber, and French condiments. These can include chilis, and mayonnaise, or any kind of pâté. It’s all stuffed into a baguette or roll that is slit down the side and can be eaten as a snack or a meal.

The cuisine originated around the mid-19th century when Vietnam was part of French Indochina. The infusion of French cuisine into local Vietnamese delicacies created the perfect balance. Anthony Bourdain described it as “a symphony in a sandwich.”

When the Vietnam War came to an end in 1975, the Bánh mì spread outside the nation and became popular worldwide. While you can find it in many Vietnamese restaurants, you need to try it should you ever visit the country.

1 The Art Of Water Puppetry Is Unique And Beautiful

One of the more fascinating traditions found in Vietnam is water puppetry. The art form began sometime in the 11th century in the villages of the Red River Delta of northern Vietnam. Puppetry in Asian cultures is pretty widespread, but the inclusion of water makes Vietnamese water puppetry genuinely unique.

The puppets are crafted out of wood, which is then lacquered. Instead of dangling strings like a marionette, the performances take place in a large waist-deep pool. The puppeteers are typically hidden behind a screen and use a large bamboo rod to support and control the puppets as they dance atop the water.

The shows are typically accompanied by a traditional Vietnamese orchestra, which includes vocals, wooden bells, cymbals, drums, horns, gongs, bamboo flutes, and a type of monochord.

There are often chèo singers who perform a type of Vietnamese opera. Everything is coordinated and beautifully colored. It’s truly unique, and most performances favor Vietnamese folklore heavily, including various legends and national history. It is most often performed during festivals, where it is often one of the primary attractions and means of celebration.

10 Events We Can’t Figure Out From The Vietnam War